The Unusual Story Behind “Stand Up, Stand Up for Jesus”

I’ve just arranged the hymn Stand Up, Stand Up for Jesus and sometimes like to research the history of the music. This one has quite a story.

Stand Up, Stand Up for Jesus was a hymn inspired by the dying message of Dudley Tyng, a young preacher in Philadelphia who was forced to resign from his Episcopal church pastorate for speaking out against slavery in the mid 1800s.

In addition to starting a new church, Tyng and other ministers preached revival meetings at the local YMCA during lunch and soon began to attract thousands (this revival period is known as “The Work of God in Philadelphia.”) In March of 1858 Tyng preached a rousing sermon to 5,000 young men at the YMCA and over 1,000 made a profession of faith. During his sermon he supposedly said “I would rather that this right arm were amputated at the trunk than that I should come short of my duty to you in delivering God’s message.”

Only a few days later Tyng left the study of his country home to visit his barn where a mule was harnessed to a machine that was shelling corn. When he patted the mule his sleeve was caught in the cogs of the wheel and his arm was badly maimed. He passed away the following week from the injury.

Before he died, he was asked if he had a message for the ministers at the revival and he replied “Tell them, ‘Let us all stand up for Jesus.'” His friend and fellow preacher, Dr. George Duffield, was touched by the words and wrote the hymn Stand Up, Stand Up for Jesus. Duffield concluded his sermon the following Sunday by reading the lyrics as a tribute to his friend.

Duffield’s Sunday School superintendant printed copies of the poem, the lyrics soon found their way into a Baptist newspaper and the hymn spread from there.

Several melodies have been written for Stand Up, Stand Up for Jesus. The one used in most hymnals was written by George Webb, founder of the Boston Academy of Music. He wrote the tune in 1837 originally for “Tis Dawn, the Lark is Singing,” a song in a secular musical.

Download sheet music, chord charts, tracks, multitracks and orchestration for Stand Up, Stand Up for Jesus exclusively with a hymncharts subscription. You won’t find this arrangement on any other website. 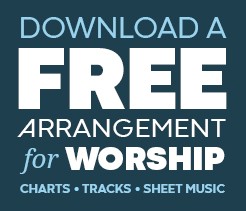